History of the Porsche 924 Carrera GT

In 1979, Porsche unveiled a concept version of the 924 at the Frankfurt Auto show wearing Carrera badges. One year later, in 1980, Porsche released the 924 Carrera GT, making clear their intention to enter the 924 in competition. By adding an intercooler and increasing compression to 8.5:1, as well as various other little changes, Porsche was able to develop the 924 Turbo into the race car they had wanted, dubbing it the "924 Carrera GT". 406 examples (including prototypes) of the Carrera GT were built to qualify it for Group 4 racing requirements.[11] Of the 400 roadgoing examples, 75 were made in right hand drive for the UK market. In 1981 Porsche released the limited production 924 Carrera GTS. 59 GTS models were built, all in left hand drive, with 15 of the 59 being raced prepped Clubsport versions.[12] 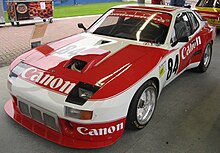 Visually, the Carrera GT differed from the standard 924 Turbo in that it had polyurethane plastic front and rear flared guards, a polyurethane plastic front spoiler, a top mounted air scoop for the intercooler, a much larger rubber rear spoiler and a flush mounted front windscreen. It featured Pirelli P6 tires as standard, and Pirelli P7 tires were available as an option along with a limited slip differential.[13] It lost the 924 Turbo's NACA duct in the hood but retained the air intakes in the badge panel. This more aggressive styling was later used for as motivation for the 944. The later Carrera GTS differed stylistically from the GT with fixed headlamps under Perspex covers (instead of the GT's pop up units). GTS models were also 59 kg (130 lb) lighter than their GT counterparts at 1,121 kg (2,471 lb), and Clubsport versions were even lighter at 1,060 kg (2,337 lb).[14]

Lastly, in 1981, Porsche entered one of two specially built 924 Carrera GTPs (the "944GTP Le Mans") in which Porsche Motorsports introduced a new prototype highly modified 2.5 liter I4 engine. This engine sported four valves per cylinder, dual over head camshafts, twin balance shafts and a single turbocharger K28 to produce 420 hp (313 kW; 426 PS). This last variant managed a seventh place overall finish and spent the least time out of any other car in the pits. This new 2.5 liter configuration engine is the predecessor of the 944 platforms and the later 1987–88 944S 16V M44/40 power-plant.

Production of the 924 Turbo ceased in 1982 except for the Italian market which lasted until 1984. This was due to the restrictions on engines larger than two liters, putting the forthcoming 2.5 liter 944 into a much higher tax category.

credit to wikipedia for data